Located in the center of the Bay Area, the consolidated City and County of San Francisco sits on the northern end of the San Francisco Peninsula in one most scenic and naturally diverse regions of the West Coast.

San Francisco is a fun vibrant metropolis at the heart of the Bay Area. Fueled by growth and diversity, it serves as the cultural, financial, and commercial centerpiece of North California.

It's one of the most iconic cities in California. The Golden Gate Bridge alone is visited by over 2 million people a year. Some of its most famous sights landmarks include its eclectic mix of Victorian and modern architecture and its steep rolling hills.
Most of the city's diverse neighborhoods have plenty of shops, and restaurants. Residents here enjoy the convenience of having everything they need close by, including farm fresh groceries.

In 2015, the city was ranked as the most livable city in the U.S. according to an international report by a global consulting agency named Mercer.

Prospective buyers will be pleased to find a wide range of real estate types throughout all the city including single-family homes, condos and townhouse properties. As well as some vacant lots and land.

Get in touch with Richard Sarro today to learn how you can find the perfect home in San Francisco.

With a total land area 46.9 square miles, San Francisco may not be the biggest county in the Bay Area but it's certainly the most exciting. The city features numerous iconic attractions and places to see and things to do. If you haven't had the chance before, make sure to visit these sites first.

Neighborhoods with the best restaurants include: South of Market and the Mission District.

Stunning two-story 1940’s home on a corner lot located in the Excelsior District. Set across the street from Crocker Amazon Park, access to large playgrounds, numerous a...

Stunning two-story 1940's home on a corner lot located in the Excelsior District. Set across the street from Crocker Amazon Park, access to large playgrounds, numerous a...

Stunning two-story 1940’s home on a corner lot located in the Excelsior District. Set across the street from Crocker Amazon Park, access to large playgrounds, numerous a...

The San Francisco Shipyard is a community that offers the ultimate experience in urban living. Built in 2016 and positioned directly on the San Francisco Bay, this 750-ac...

Nestled in the sunny and fun Polk Gulch Neighborhood, a nice one bedroom one bath condo in a modern, elevator building a friendly and private corner-unit-home, updated k...

Contractors/Developers & Investors, this VACANT 3 UNIT bldg. is a Victorian beauty. It presents an excellent opp. to purchase an investment in vibrant lower Haight Street...

Infinity Sky Residence with stunning views. This Tower II 2BR has both city and water views (not blocked by Mira) from all rooms and the spacious sky terrace attached to ... 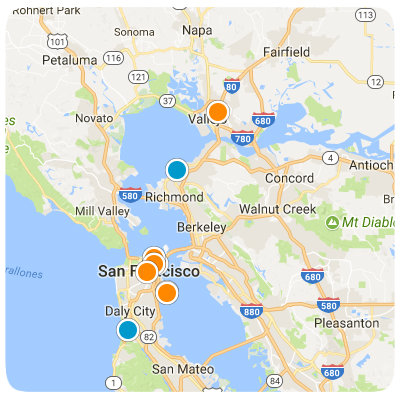